Last year at the Peachtree Road Race expo – my hubby and I were walking out the door until we noticed the EFX booth that was doing a balance demo on someone.  We stopped to watch and of course had to try for ourselves to believe it. 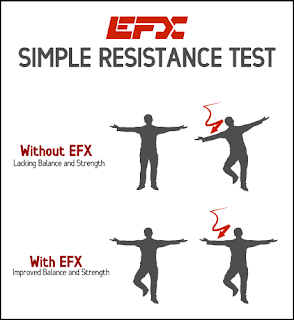 They start by getting you to stand on one foot, arms out and they push down on your arm while you are resisting the push to stay balanced.  Chris and I both quickly fell off balance…. Then they hand you the bracelet and do the test again.  I swear when I say I noticed a drastic improvement in my balance!!!

The nay-sayer in me said “but this time I was prepared… so I was just naturally more balanced” so I did the test again.  Yes, I was a little more prepared and a little more stable – but nothing compared to the results when I was holding the bracelet or had it on.

I was sold.  I chose the clear oval bracelet – Chris the black oval… but they had a TON of choices!!!

I have literally worn mine every single day (except when my sis stole it from me for a week) since the expo and wouldn’t go a day without it.  I have performed the test on numerous of my friends asking ‘what is that thing?’ and the results have all proven that it definitely seems to improve balance.

Yes occasionally I’ve had people who were really balanced before and the with/without bracelet effect was minimal but they did see some improvement.  For most people that Chris and I have done the test on it works and I always recommend them to my friends.

I’m a klutz.  During the summer you will often see me wearing jeans to cover the numerous bruises I accrue on my legs from running into things, falling into things, etc.  Since I’ve had the bracelet I feel more balanced (and have no bruises to show for it!!) and I feel more stable when I run. 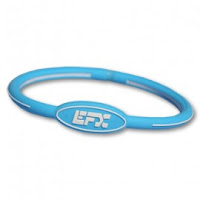 Check them out for yourselves… and if you want to TRY one for yourself – they gave us 4 bracelets to giveaway!!  Follow our blog for all the ways you can win one!!


First EFX Giveaway!!!
Go to http://www.momsrunthistown.com/facebook-list.php – find your STATE (or province) facebook page and ‘like’ it.  One fan from the state (or province) with the most likes by May 31, 2011 will win an EFX balance bracelet!!  Make sure you also “like” our national facebook page at facebook.com/momsrunthistown – we will double check that the winner selected is a fan of BOTH pages :)  GET TO IT!!

And just for the record – I’ve had mine a YEAR before I asked them if they would be interested in doing a giveaway… So my review is 100% legit! I can PROMISE you I will never endorse products that I don’t believe in!!