Fun in the mud: Our Virginia Beach chapter in the NEWS!!

Our very own Virginia Beach, VA chapter of MRTT made the local newspaper for their participation in the Military Challenge!!  Check out the mention of MRTT and a quote from the VB chapter leader Courtney McDonough!!!

They had 2 MRTT teams and placed 3rd and 5th for the female teams!!!  THESE MAMAS ROCKED IT!!!!
(I’ve bolded and block quoted the part about the VB chapter) 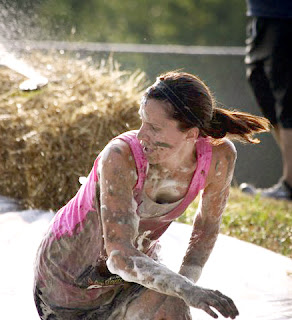 More than 1,400 individuals spanning 25 states and Canada were up to the “challenge” and competed in the 2nd annual Military Challenge, July 30, at the Virginia Beach Sportsplex.

The event featured an early morning 5K+ military-style confidence course and a Kids’ Mini Challenge, organized by The Flagship Newspaper, Inc. and KaleRunning/Mettle Events. A portion of the proceeds from the 2011 Military Challenge will go to benefit the American Red Cross Coastal Virginia Region and the USO of Hampton Roads/Central Virginia.

Although the day had its share of competition, it was also about camaraderie, military appreciation and fun.
The Rietscha family from Hampton made the day a fun-filled, muddy experience, as both Ed and Debra competed in the 5K+ as a team couple.

“It was kind of a survival mode just trying to finish,” said Ed, a cross country coach at Kecoughtan High School in Hampton, who was one of the top-5 fastest males with a time of 22:17. “Some of those obstacles are brutal … the mud was the best. You almost wish they had two mud places. But it’s awesome, seeing the people finish coming through, before they get to here, covered in mud – it’s awesome.”
“I’ve run 5K’s before, but it gets boring after a while, so I wanted something different,” said Debra. “And this was a real challenge.”

According to Ann Hupp, owner of Kale Running/Mettle Events, 27 percent of pre-registered adults who competed in the 5K+ were active military personnel, with the oldest and youngest runners being 73 and 9 respectively. This number does not include the military children and family members who were also in attendance Saturday morning – the military were well represented at this event. 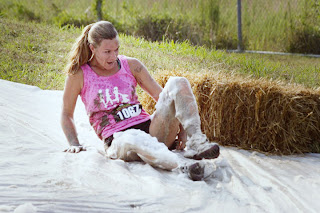 “I just think it’s in our nature to be fit,” said Hupp. “With all of these obstacles, you don’t think about, ‘Oh my God, I’m running’ … so it’s kind of cool and it’s a great team builder.”

For Team Naval Auxiliary Landing Field (NALF) Fentress, team building and military spirit were both high priorities for the day.

“This was our first time running it and we had a great time,” said Navy Aviation Boatswain’s Mate – Handling 2nd Class Garmine Bosio, a firefighter and member of Team NALF Fentress. “You’ve got to keep your pace, and on top of that, you’ve got obstacles that you have to go through. So it’s challenging, but it feels good.”
As a firefighter, Bosio feels that his job keeps him in optimal shape to be able to handle a course such as this.
“We’re very prepared – Navy PT / firefighting physicals, all of the agility we go through, and of course, SCBAs (self-contained breathing apparatus),” he explained. “The thing is, people can be at their house thinking that they can do this because it’s not that bad – it’s a military challenge and so many people do it – but until you get out here and really did it and pushed yourself, then you’re proud of yourself and feel good. I feel good right now.”

There was also a fair share of unique non-military teams, such as Team www.MomsRunThisTown.com (MRTT), a “moms only” running club started by moms – for moms – to support moms in their running endeavors, who had 10 members competing this year.

“It was so much fun. We did it last year and we were so excited to do it again this year,” said MRTT team member Courtney McDonough from Virginia Beach. “We’ve been training a little bit together out at First Landing, hitting up some of those obstacles and we met out here this morning … we definitely could have done more, but it definitely gave us a little taste of what was to come.” 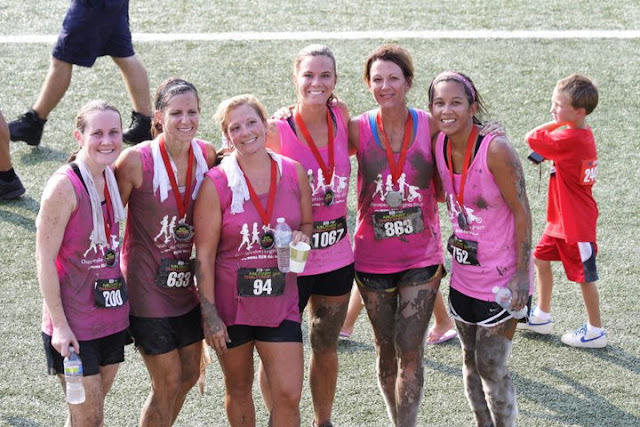 Although the 2011 Military Challenge has come to close this year, Hupp is already dreaming up next year’s course and obstacles.

“Next year lets crush all the records,” said Hupp. “…and if everyone who comes this year brings a friend next year, just think of all the money and the impact we’ll make.”