Ok let me give you a little history as to why this is so exciting.  I have literally read 2 … yes only TWO books since the 2nd grade.  I remember reading ‘How to eat Fried Worms’, ‘Sideways Stories from Wayside School’, ‘Wayside School is Falling Down’ and ‘Runaway Ralph’ and some how I milked those books for every book report until the 5th grade.  From 6th until highschool – I have no clue how I managed NOT to read books…. I know I did a book report on Jurassic Park in the 8th grade (they had the movie out then – which I watched).. and I watched the movie for ‘the Great Gatsby’…..

Bottom line is I DON’T READ.  I hate it.  I feel like there are a MILLION other things I could be doing with my time than reading.  I can get the info I need in about 10 seconds with a quick google seearch.

Ok so back to the story.

My hubby and I went to the Peachtree Road Race Expo and while walking down an aisle he said “There’s Jeff Galloway”.  I look over and suddenly felt star struck.  Another side note – I don’t give a rats about tv/movie stars – stand me in front of Tom Cruise and I wouldn’t even ask for his autograph.  On the other hand – I looooove local celebrities!!!!  I guess I just connect more with them and feel like they are just more real.

So I did this weird “should I talk to him? what should I say? should I ask for a picture?” back and forth thing.  I don’t know what happened but I just started walking over to him and blurted out the first thing that came to my mouth… “Are you Jeff Galloway??”   REALLY????  I knew it was him?  Why did I ask him that?

Everything after that was a blur.  I think I mentioned something about a workshop he did in Greenville, SC that I wanted to go to and something about the Disney Princess Half Marathon, and even mentioned I started a running club for moms which he said “Oh really?  That’s great!” in an excited voice!  (did I give him a card??? no.  And I regret that.) And then asked for a picture which he graciously obliged.

Oh – and I’m assuming you know who Jeff Galloway is right?  He is like the definition of a runner.  He’s an Atlanta native – won the first ever Peachtree Road Race, has written numerous books, he is the creator of the ‘Galloway Method’ of run/walking with TONS of people use, he is just a legend.

Ok, so I go home still kinda giddy about meeting Jeff Galloway and remembered my father in law gave me a stack of running books (most written in the ’80s – he used to be a runner) and I knew two of them were by JG (If you are reading this Mr. Galloway I apologize for shortening your name…. I’m lazy haha).   I blew the dust off the covers and started looking through the books to see which one I wanted to start with. 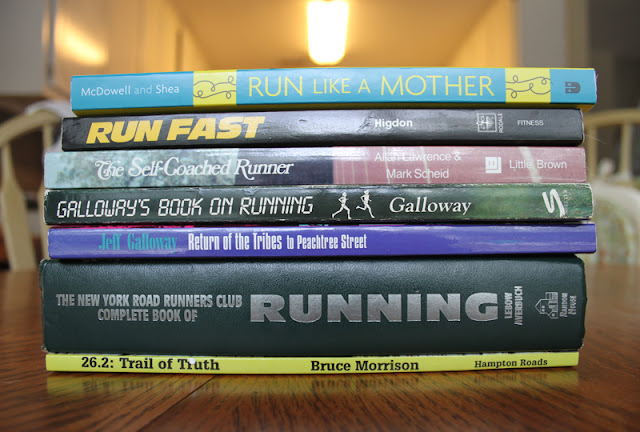 One was WAY too big (guess which one….) .  One was more of just motivational stuff.  Heather let me borrow her copy of “Run Like a Mother” – but I kinda got lost in the intro as it seemed like a ‘storyline’ type of book and I wanted INFO.  If I’m going to read a book I want to LEARN.  A few others seemed kinda good – but not what I wanted to start with – and then I read the intro to “Galloway’s Book On Running” Copyright date ….. 1984 :)  Yes, a ‘vintage’ book.  And even autographed to my father in law from JG himself ;)

I literally could not put this book down.  I was reading it while AC was eating dinner, I was reading it before I went to bed, and got the “Pam, go to bed” last night to which I said “I’m almost finished with this chapter hang on”.  OMG THOSE WORDS LEFT MY LIPS.  I can’t believe I found a book that I actually think is good enough to keep reading.

Yes, some of the info is out of date… the whole idea of a GPS watch for pacing/distance was probably not even a thought in his head.  One part mentioned ‘hiding water bottles in bushes along your route’ – and now we have FuelBelts.  But overall – the running ‘meat’ of the book is dead on and makes SO much sense!!!!  I’m just about to start the chapter on pacing and he has touched on running pyramids (base, hill training, speed work) so I’m like DYING to get into these chapters)

This man is a genius.  It looks like he has a new version of this book – I may have to get it (if it’s different/current)… and I’ll definitely get his other books.  They are SO easy to read and understand – and INTERESTING.

So that’s it.  I’m reading a book.  I’m about half way through and dying to find time to finish it up.  I’m SURE I’ll be posting more on stuff I learn and read…. I was just so excited that I was actually reading a book I had to share :)

One Response to I’m READING a BOOK!!!