If you’ve followed us from the beginning you will know how crazy-curious and infatuated I am with the whole barefoot/minimalist running movement. 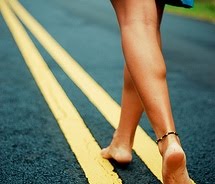 My hubby got me  interested in it back when he was running (golf now consumes his free time).  At the time – “barefoot” was new – it was ALL about the Tarahumara Indians and trying to mimic their barefoot running style.

As far as footwear went – your choices were Vibram Fivefingers, this ‘new’ company called Newton, or literally – going barefoot.  Well – TRUE barefoot was out of the question (for me anyway)… and just the thought of having to spread out my little piggies into some sort of toe-socks with rubber bottoms made me cringe – which left me with these new (and disgustingly expensive) shoes called Newtons.

Being a gear junkie like I am – I liked wearing these super new, super expensive, super NEON, super cushion-y “natural form” running shoes that were suppose to mimic barefoot running. And I was ALL ABOUT being a trend-follower for this new barefoot trend.

Flash forward a few years and it FINALLY dawned on me (after really digging, reading, and seeing a bazillion shoe companies come out with a “minimalist” shoe) that my shoes aren’t really “minimalist”.  They are “natural form” which means they are supposed to help you achieve a more natural form of running.  And all the hype about it changing your stride to mid to forefoot running seemed to be just that… hype.  After 3 years of running in them and looking at bad race photo after bad race photo – and literally SEEING my heel striking the ground I realized that regardless of the 3mm drop – I was still being spoiled by the cushioning of the shoe and still was striking my heels.

It was time to switch up my shoe.
I have been talking up this whole ‘barefoot’ thing since the get go and kept bragging about how my shoes were changing my form until I actually SAW that nothing was changing.  Embarrassed that I couldn’t post a marathon photo from my first marathon without my heel prominently striking the ground – I realized it was time for a change.  With a bazillion new ‘minimalist’ shoes on the market I literally didn’t know where to turn.

I felt I needed a company that wasn’t known for making  super-squishy shoes in the past…. After all – if a company has been making padded heel shoes for their entire existence – who were they to be ‘experts’ on minimalist shoes??

As I was perusing the shoe section.. I saw these super flat looking shoes marked with “Vibram” on the bottom.  They were actual SHOES – no weird finger-toes… they were normal (and SUPER cute looking SHOES).  I didn’t even look at the brand – I just assumed that Fivefingers wised up and got rid of the finger toes for people with abnormally long/weird toes like myself.  Little did I know “Vibram” is the type of super durable rubber they use ;)  So for all of you that just learned something – you’re welcome ;)

Anyway – love at first try on.  They were REMARKABLY comfortable despite the fact that they had hardly any cushioning, wide open toe box, and then I look…. they were Merrells!!!  A shoe company that my hubby and I both love for the outdoors-y nature of the company.  I have casual Merrells, Merrell hiking boots….L-O-V-E the company. 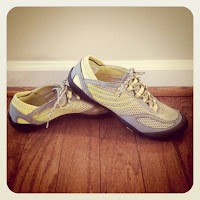 I remembered my friend had just picked up a pair that she was running in a few weeks prior so I gave her a ringy-dingy and sure enough – she was running in the Pace Glove (the shoes I had on).  I tried on a few more shoes and quickly realized these were the shoes for me.

Nervous and excited about their first appearance on the road – I went to the treadmill first and gave the a whirl.  I could immediately feel the need to change my form and move away from my heel strike… about 10 minutes into the run I could honestly feel my form change and I felt what it REALLY felt like to land mid foot.

In a way I almost felt gypped …. what have I been missing out on?  I’ve been VERY fortunate to stay injury free while running – but I have PROOF that my form is not good.  How much faster and more efficient can I be with this new found form???

Three miles later I was feeling good and felt ready to take them on the road.  But that’s when my brain started over-working.  I was due for a new pair of shoes so if for some reason these didn’t work out I’d have to buy another… and whoever said running was the cheapest sport is a liar…

I let my brain win out and was trying to find a reason to take the shoes back.  The right the side of the shoe hit my ankle bone (similar problem that led to me returning the Kinvaras) and over analyzed it to the point where it drove me crazy.  I took them on one more treadmill run before convincing myself that the rubbing on bony ankle bones would be an issue and returned them.   I’m thinking I was more afraid to try something new than anything….

Anyway – Last weekend I ran the Disney Princess half and was so disgusted  with my form and my photos I said enough is enough and it’s time to suck it up and start working on my form.  The form that I’ve been telling people to have all this time and haven’t done anything about…..

After checking out the Merrell website and seeing MORE barefoot/minimalist options than I knew were available – I found two other options in their barefoot line (with a 0mm drop!!!!):  The Barefoot Run Dash Glove and the Barefoot Run Bare Access Arc. I’m SUPER excited to try these out!!!

Now let me say – I’m not saying I’m going to go hard core barefoot (I like footwear)… and I wont put my Newtons in the trashcan… but I honestly feel like I can’t “learn” proper form in something with so much cushioning.  I’m very excited to actually LEARN the form and then be able to translate it into whatever footwear I have on.

Stay tuned for more info on my progression. It’s time and I’m ready to make the switch!!!

One Response to It’s time to go barefoot (ish)….