More on the Galloway Method

I have touched on the Galloway Method before and have always been quite curious about it… For me it’s hard to run then stop to walk.  If I break up my pace I feel like it will be hard to start again – but at my marathon a guy was doing this and ended up passing and finishing ahead of me!!  And I thought I was doing pretty good!!  I’m willing to give it another try… I do know that when I take a walk break to walk out a cramp I DO feel stronger when I start back… hmmm.

Anyway – one of our members does it (and is a Galloway Group Leader) so I asked her to tell us more about it!!!  You can read more from Jeff Galloway by visiting www.jeffgalloway.com.  Here is what Amber has to say:

As a mom, I’m sure you can relate to this. You want to get rid of the baby weight as soon as possible (even if it’s been years since you had a baby!). As a new mom who had just had my second child in January 2010, I wanted a quick, enjoyable way to lose the baby weight. I was previously a runner before mommyhood took over and consumed my life – I ran a few 5ks here and there but never dared to venture over 3.1 miles. I wanted to get faster, and I wanted to run longer distances, but many failed attempts at the “Couch to 5K” program and other similar training programs left me injured and discouraged. 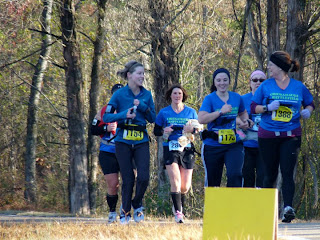 I first learned about the Galloway program in 2010 when I received an email about the program at work. The email stated that the Galloway program could turn me into a half-marathoner in 6 short months, even if I had never run a mile before. I couldn’t believe it, so I talked to a friend who had gone through the program the previous year and actually completed a full marathon using the Galloway program. She highly recommended it and assured me that yes, I COULD become a half-marathoner if I really wanted to. I must admit that I was still skeptical and even emailed Jeff Galloway himself, and even he told me I could do it. So, four months after having a baby, I was in.
If you’ve never heard of Jeff Galloway, he’s a highly respected member of the running community with quite a few accomplishments under his water belt. He was a member of the 1972 Olympic team who has won many prestigious races such as the Peachtree Road Race, Honolulu Marathon, and the Atlanta Marathon. He was even a top place finisher in the Boston Marathon. He has run over 120 marathons and now uses his expertise to coach others through the Galloway Run/Walk/Run program. The Galloway program is simple – basically, you run intervals mixed with walk breaks, such as run for 1 minute, walk for 1 minute, run for 1 minute, and repeat. Run/walk ratios are based on your desired pace, but you’re free to change them around to suit your preferences. The Galloway program also utilizes “magic miles” which are speed benchmarks that allow you to track your progress throughout the program.
I know what you may be thinking. I will go too slow if I take walk breaks. I’ll admit, I’m a slow runner, but I’m still competitive against myself and try to run faster every time I run. I was amazed to find that I was able to run almost as fast, if not faster, using the Galloway method as when I only ran without taking walk breaks. This is because walking and running each use different leg muscle groups. When you continuously run, you only use one muscle group which causes those muscles to fatigue quickly. Intervals allow your legs to utilize different muscle groups so that you can conserve energy and run faster during your running intervals. However, the best benefit of the Galloway program is the friends you make in your running group. I cannot tell you how many times I’ve wanted to give up and my group members motivate me to keep going. Not to mention, it’s a lot easier to get out of bed at 6am when your group members are depending on you to be at a run than if you were running by yourself. 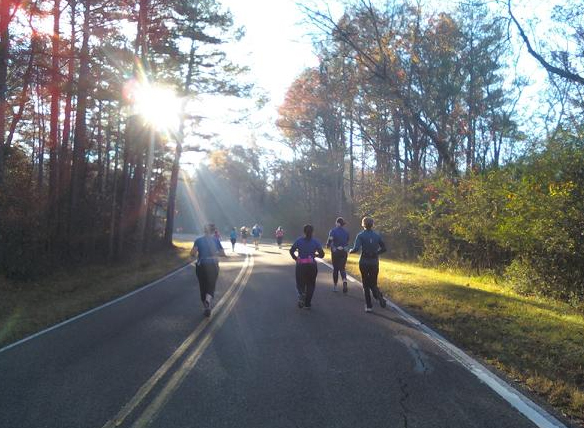 When I first began the Galloway program, I could barely run three miles without feeling like I would die. On our first group run, we ran 3 miles and I wasn’t tired at all when we finished. I’ve gone from running three miles to running three half-marathons. I’ve lost 30 pounds, met new friends, and even became a Galloway program group leader. It’s hard to believe that I’ve accomplished all of this within a year and a half. It’s not easy – you do have to dedicate yourself to 2 short runs and 1 long run per week – but the Galloway program prides itself on being injury-free and it works. If you really want to run a half-marathon or marathon, you CAN do it. I am so impressed with the program that I take every opportunity to tell runners about it. If you find that other training programs are not working for you, give the Galloway program a try. 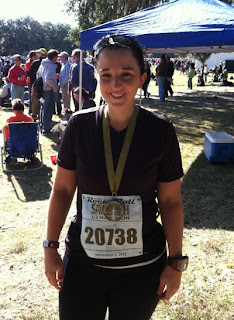 One Response to More on the Galloway Method