We had the chance to test out the Mountain Buggy Terrain jogging stroller.  I’ll admit – I’m a pretty die-hard fan of my BOB Revolution so I felt like I’d be a pretty hard sell on anything different.  As I started taking it out of the box, I immediately started finding features I liked about it!


First off check out my cute little 2.5 year old in the Mountain Buggy Terrain ;) 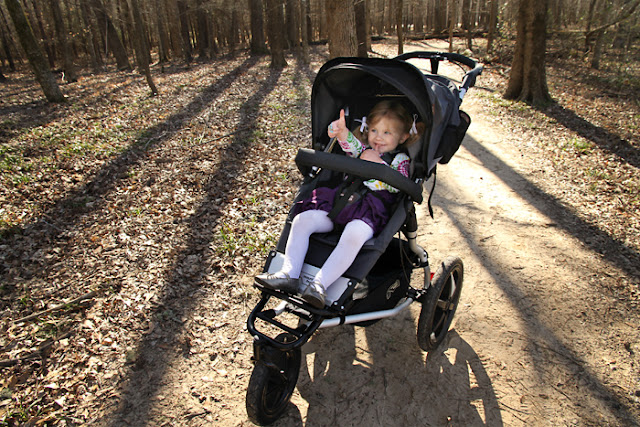 On to the Pros.  Here’s what I LOOOOVE about it: 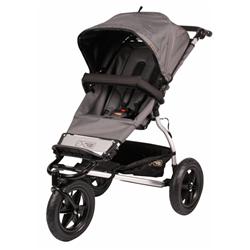 Now price point…. assuming we are comparing full price MSRP – looks like BOB was $449 and MB is $499.  I think BOB must have gone down in their price recently to $399 – marketing strategy now that they have competition?? I don’t know…. but from online shopping looks like you can get the BOB for as low as about $375 and MB for $475. Is it worth the extra $100???  I say yes.  If I’m going to invest that type of money in a quality jogging stroller the adjustable handle bar, seat reclining back, and sun shade adjustability, distance of the handle bar from wheels, and the breaking system are enough to sell me alone on the extra $$.  The fact that it actually handles trails, bumps and turns better just makes it gravy.

I will say that the BOB Revolution is found online occasionally on clearance (random special sales and when clearing out older models) but there’s no counting on that….  I do still love the BOB Revolution and still have my original just as a backup.  But if I was preparing to buy one and I had to pay full price – I’d say the Mountain Buggy Terrain would win out.

So that’s my opinion.  Maybe more info than you needed but I really was satisfied with the quality and honestly I’ve been with my BOB for so long (and know it’s a ‘respected’ brand among my running friends) I was doubting the MB’s abilities.  I thought I’d be a hard sell but as soon as I pulled it out of the box and saw the adjustable handle bar I was excited to see what else on my “wish list” it had…. Once they make a pouch to fit across the handle bars it will be darn near perfect.  Of course I could use the 3-4″ back in my trunk – but with everything else I can’t help but to love it.
Be sure to visit the website for videos/details/photos and what not by clicking here:
http://mountainbuggy.com/en/buggies/single/terrain/usa
This review is completely unsolicited and 100% my thoughts and opinions.  Mountain Buggy does not pay to advertise on our sites nor has paid for this review.  This was actually written to someone who was asking my opinion on the Mountain Buggy.
Share →
Tweet