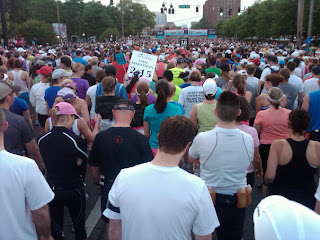 The Country Music ½ Marathon & Marathon is held every year in Nashville, TN during the month of April. There are approximately 45,000 runners that participate every year! Although this is one of the biggest races I have ran, it is by far the best organized race! Nashville seems to pull this race off every year with very few issues! When I ran this race in 2010, it was only my 2nd ½ marathon. My first was a MUCH smaller race. I assumed that ALL big races were this organized! HOWEVER, I have learned this is far from reality!!

The race expo for this race is HUGE!!! I was in complete awe when I entered the room! There are tons of vendors and lots of freebies!! It is held in a very large convention center. Although it does get crowded during peak times, it is never so crowded as to make it uncomfortable. Packet pick up is very easy and organized. They give you a swag bag – so – you have something to put all your goodies in!

The race shirt for the past 2 years is definitely the only thing negative I have to say about this race! For everything else to be so “grand”, the shirt is some what of a let down. Very plain and basic!! Especially when as soon as you round the corner, there are soooooo many amazing shirts for sale!! One may think this is a ploy to entice merchandise purchases!! Give them a “ho hum” race shirt BUT offer amazing shirts for purchase???? I would hope that’s not the case But…….

The race start line is in “down town” Nashville. Therefore, the majority of the hotels are within walking distance of the start line. If not, ALL of the hotels offer shuttles. Although there are huge amounts of people, the traffic and getting to/from the start line is not a big issue! The start line is the biggest example of the organization of this race. They a literally have a field full of port-a-potties. I have no clue how many there are. But there were too many to count!! And amazingly there were still lines!! But thankfully the lines were quick! In addition, the corrals were broken down into smallish groups the corrals went from A-Z & AA-ZZ. I am not sure of the time in between releasing corrals, BUT it works fabulously!! NO BOTTLE NECKING !!! It may take you 40 minutes to get to the start line, but, when you do you run without trampling people!! Timing chips are used, so it does not matter if it takes you a while to get to the start line – your time doesn’t start until you cross the start line. It just makes it a little confusing when you come to a time clock along the course. You have to remember – I started 40 min after time started!!

The race course is very scenic and there is crowd support virtually throughout the entire race! There is great scenery all throughout downtown Nashville and the outskirts. AND if you run with one of their pacers, you get a narrated tour of the town! In addition, the have live music all throughout the course!! They have more than enough water stations and were never out of anything on the course! However, Nashville is hilly! Not ridiculously, but it is definitely NOT a fast & flat course. Therefore, unless you are trained for hills, it is probably NOT a course you will “PR” on. Brightroom Photograpy does the pictures. They take tons of pictures all throughout the race. 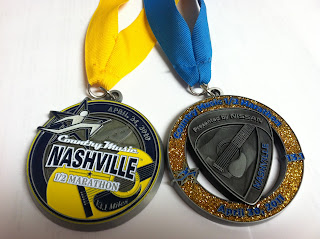 The finish line has an amazing spread of snacks & drinks. I am most impressed with the quantity. There is always enough even for the slower runners coming in late. The medals I have gotten for 2010 and 2011 have both been awesome! AND different. I have ran races twice and the medals look almost the same! That is a negative to me. I want them to look different!  They do a good job of maintaining the country music theme but making the medals very different!

Admission to a concert at the coliseum is included in your race fee. It Is always a big name artist. I do not remember who it was in 2010. In 2011 it was Montgomery Gentry. They were awesome and it was a great way to celebrate after your race!! It is only open to race participants. Its general admission and the venue is great with not a bad seat in the house!!

This race is on my repeat list!! I will definitely continue to run it!  In addition, I would recommend it to anyone! It is very well organized with tons of perks to offer! Nashville is a great town to visit and explore! With entertainment for everyone! 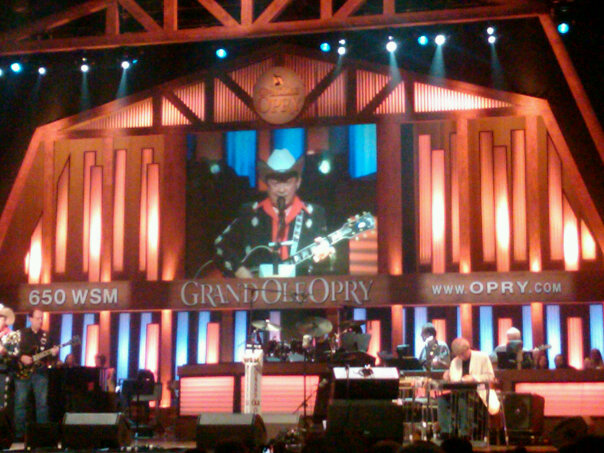