Thought for the day… Race Recap: DIVAS Half Marathon

I was so bummed to finish the Disney Princess Half Marathon this year DISAPPOINTED :(  I signed up a year ago and have been looking forward to it.  It’s the most expensive half I’ve signed up for ($145 on early registration) plus throw in a $200/night “on location” hotel (thank goodness for 2 roomies to help buffer the cost), gas to get down there (my share alone was $75!) and that makes for one expensive race!

After being bummed out the weekend and asking other runners their thoughts I realized my expectations were apparently too high going into the race.  Those who enjoyed it said going into it they knew a majority of the race was run on the highway (Seemed like about 10 out of the 13 miles were on the highway or without Disney scenery in the back) and they went in with groups of friends to take pics and not focus on time. 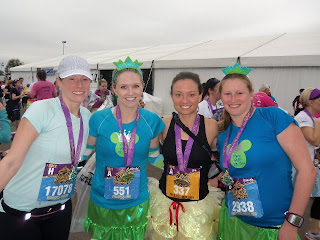 I’ll admit – it was my fault for only looking at Disney photos and assuming it was run almost entirely in the park itself.  I wish I had done more research before – but you hear “Disney” and “Princess” and “Start at Epcot – run through Cinderella’s Castle” and “Costumes” and you can’t help but to dream up this amazingly fun race – 13.1 miles of MAGIC….. and sadly that’s not what I got :(

I assumed there would be camera men at the start taking cute pre-race photos of me and my friends like most races do… and didn’t see that.  I assumed there would be characters walking around and fun back drops at the finish area for photos – and didn’t see that.  I expected this dramatic finish line of characters/flags/glitter/princess magic – and completely missed Mickey and Minnie giving out high fives.

Again – I guess all of this is my fault for lofty expectations – but when I kept hearing all these girls saying how AWESOME the race was – I just took their word for it.  What I found was that if you are going into this race knowing about the highway miles and with the intentions of stopping to smell the roses, taking pictures where it was scenic, taking pics with the characters, run/jogging/walking with a friend or two, goofing off, and just making the race more about you and your friends – then it was good.

So….This is not a race to PR on (although it is flat) – this should be a girls weekend, a race to have fun with your friends, to meet friends along the way, to encourage friends who thought they could never do a half marathon…  Think of it like a training run in costumes with some added characters and photo ops along the way. :)  Go in with a FUN attitude – ditch the watch – and just finish with a smile on your face!

With all that said – the review below is broken down below into a few sections.  It’s not intended to be negative – it’s just REAL.  I’m not saying not to do this race – but PLEASE don’t let this be a “serious” race or you may not enjoy it as much as it should be enjoyed!!

I did have a great time with my gal pals over the weekend for a kid free trip – but this review is for those who want to know what to REALLY expect before they sign up and to help you get a game plan before you go into it. 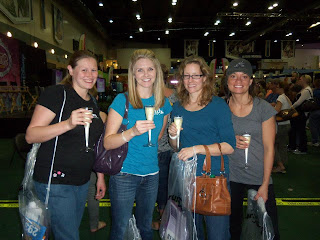 Race Expo:
I’ll start out and say I love free SWAG.  I love getting a goody bag and filling it with free samples and finding cool new products.  I heard this race had a great expo so once again my expectations were high.  It was a LOOOONG walk to get to the expo (more training?? haha)  Race bib pickup was good.  Got our bibs, tested the timing chip and headed to the expo which was another walk to a different tent.  Tshirt/bag pickup was in the very back but quick.  T-shirts fit good and they are a girly fitted look which is so nice compared to race shirts I’ll never wear.  They do let you exchange sizes if you need to which is nice.  We found a little booth with champagne/beer which was fun considering this was a girls trip – so we got (paid for) 4 champagnes.  First stop had free Luna Bars so we grabbed some.  I was getting excited to fill my swag bag.  We walked…. and walked…. and walked…. and no one was giving out any freebies :(  Most of the booths were things I’d seen before… very few chances to ‘register to win’ stuff (I’m sucker for that) and then it was over.

Hotel: We stayed at Disney’s Caribbean Beach Resort which they consider “On Location” meaning the buses will come pick you up at bus stops.  This was in their “Moderate” list of hotels (meaning they have mini-fridges in the room).

Race morning:  A little description of how our race morning went and tips for those who need to mentally prepare for their morning.

The Race:  Just a reminder and brief summary – consider doing this race as a fun/group event with no regards to your finishing time.  Now that it’s over I SO wish we had just stuck together as friends, stopped along the way taking pics and had fun – not set out for a time goal.

My suggestions to Disney(which I’m sure they will never see nor care about….)

Who this race is for:
If you are a walker or beginner runner who thinks you will NEVER finish a half marathon – I’d say this race makes it possible to achieve your goals.  You will find plenty of beginners and walkers so you will be in good company.  OR if you can gather a group of your friends to walk/jog/slow run it with you, stop for goofy pictures at every station and do not take finish time into consideration you may enjoy this race.

Who this race is NOT for:
If you are looking for scenery, loads of princess atmosphere, pomp and circumstance, crowds cheering, bands playing, excitement, etc – you are looking in the wrong spot.

I also would not recommend this race as a PR race unless like I said you work your way to the VERY front where the “elite” athletes would start because you will be trapped by slower runners.  While it is flat for the majority of the race, the boring lack of scenery is demoralizing and wont keep you motivated.

Would I do this race again?  Not unless I got an amazing hotel deal and a free entry to the race AND had great gal pals to goof off with me along the route.

Hate to be negative…  I REALLY wish I had gone in to it with less focus on time and more focus on FUN… and have been sitting on this review forever – but a few friends were asking what to expect so I figured I’d just put it all out there.