NIGHT BEFORE A RUN DINNER

Ok, so I know ‘carbo loading’ doesn’t really work…. To us it’s more of a tradition before a big race than really thinking it will make us faster or be able to run longer…. 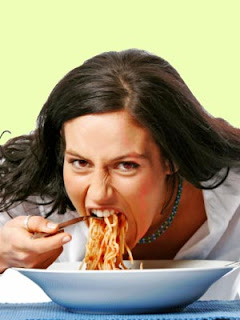 Both books mentioned it’s a load of bunk and that your meals/hydration days before will determine your ‘fuel’ level.  JG even said his last ‘solid’ meal was lunch the day before a big race.  Now I’m not so sure I can eat a ‘liquid’ diet before a race.. I need SOMETHING in my stomach or it will G-R-O-W-L at me.  However, I do try to eat something easily digestible if I know I’ll be running long the next morning.  No mexican, chinese take out or fast food.  Oh and stay away from greens the day before too – it will get things moving in a way you don’t want during a race!

However with the ‘carbo loading’ thing – SBS (Sarah Bowen Shea)  in the book (like how I shorten everyone’s names to initials?? I do it with my own daughter too – it’s a term of endearment – not lack of respect) said she went on a low carb diet for a few weeks and it made her feel like CRUD during her runs.  She started adding carbs back and was back to normal in a few weeks.  Our bodies as runners NEED the carbs to turn into glycogen (am I remembering this right??) which is the fuel that gets us moving.  Yes cutting carbs can help you lose weight… And yes, my neighbor who only eats ham, bacon, eggs, cheese and steak is wafer thin… but he’s also not a runner.  Bottom line – get a balanced diet – don’t overload on carbs… but don’t try to avoid them like the plague either.

MORNING OF A RUN BREAKFAST

I’m traditionally a power bar and coffee girl in the morning.  I can honestly say I thought the power bar would give me fuel before runs… but apparently your body doesnt have time to digest it into energy – so according to JG I could eat NOTHING and still have a good run (unless you plan to run for more than 1.5-2 hours).

The RLAM authors suggested a few good breakfast meals: oatmeal, …. ok so oatmeal is the only one I can remember hahaha… but you know – healthy stuff.  Can’t remember which book but one said cereal and milk, bananas, bagels and cream cheese, protein bars… but again – these are really only if you are longer distances.  Sometimes eating in the morning can upset your stomach so make SURE you don’t try something new the day of a race.

Both books gave a ‘thumbs up’ to coffee.  YAY!  I always felt guilty about my morning coffee habit -but they said it can give you the extra kick you need.  Just limit it to only a cup – and make sure you are well hydrated since coffee is a diuretic.

I still stick to my power bar in the morning no matter what the distance… I just need something in there to make my stomach stay quiet for the run.

DURING A LONG RACE / LONG RUN

If you are planning a 3 mile run, I don’t think it’s necessary to bring your GU’s, sport beans and shot bloks…. Longer run on the other hand may require the extra sugar blast.  Yadda yadda yadda glycogen and electrolytes… sorry – wont go into the technicals here (mainly because both books are in the bedroom and hubby is still asleep) – but your body needs them to run –  and sugar in the form of these gels, beans and blocks will help you on a long run to replace them.

I haven’t tried gels yet – the thought makes me want to vomit (there is a line in RLAM about the gels that literally made me cry laughing – but I wont repeat it….. ) but I heard they get the stuff you need to your body faster.  Maybe I’ll get the courage to try them one day….  I have tried Sport Beans and love them.  They are kinda hard to chew when I’m focusing on running…. but I swear they seem to give me the energy kick I need about 10min after I eat them.  I have some Shot Bloks in the pantry – so I’ll try those on the next long run and let you know.  RLAM authors say sugar is sugar and you can even bring little candy with you to give you the energy boost you need. I like the Sport Beans because they have caffeine – it’s like rocket fuel…

Always take your sugar things (whichever you choose) with water – it will help them to digest better.

Also wouldn’t hurt to take a gatorade, or some electrolyte drink tablet with you on really long runs.  I tried the Nuun drink tablets at an expo and they were fizzy and pretty good!!

AFTER A LONG RUN

Replacing carbs and protein after a long run is important.  I’ll keep this section short because I have GOT to get out the door for a run before it gets 98degrees here!

RLAM authors suggested a tall glass of milk after a run. Protein and carbs.  I totally dig this.  I think the idea of drinking cows milk is yukky – just a mental thing…. but dang if a big fat glass of milk isn’t the BOMB sometimes.  Add a little Ovaltine (shut it – I’m old school like that) and it hits the spot.

We’ve also discovered these protein drink powders called Gotein.  We got some free samples from their website and they are pre-measured packets that you just dump in a bottle of water, shake and drink.  The protein helps to fix little muscle tears after a run.  Surprisingly for something you mix with water they taste pretty darn good!!  Of course I prefer to blend mine up with ice and milk to make it a milkshake because its just goooood like that… but it really does work in water bottles too!!  Just make sure you drink out some of the water first – I made that mistake!!! hahaha.

Buuuut, before I go…I have to tell a back story.


It’s one of my favorites and I still to this day kid my hubby about it.

Peachtree Road Race (the worlds largest 10k with over 55,000 participants) 2006 .  A year before I started running (or even walking for that matter).  My hubby Chris was in his 2nd year back at the Peachtree and we had made it a tradition to eat at a restaurant called The Spaghetti Factory with friends the night before, you know, to ‘carbo load’ ….

I don’t know WHAT IN THE WORLD he was thinking – but something in his brain said “Pasta with CLAM sauce” sounded ‘light’.   Nothing – and I repeat NOTHING about the word ‘clam’ sounds light to me….. I even suggested maybe he go with a nice marinara or something… nope – he wanted clam sauce.

We live about an hour away from the race, so he was up at approximately 4am ish in the morning to get dressed, drive to MARTA (transit system in Atlanta – most roads near the race were shut down), and get ready for the race.  Long story short – I was right.  Clam sauce was a baaaaaad idea.  He said it was his most miserable race ever.  Yes they have port-a-potties there…. shared by your 55,000 other ‘closest friends’…. and one guy who would rather die than stink up a bathroom in public (I’ve since converted him).  I think he even said tears were filling up in his eyes throughout the race.

So bottom line is be SMART about your meal choices.  I’m going of start taking my nutrition a few days before a race a little more seriously – and please stay away from clam sauce.