I have a bad case of SELF DOUBT~~~Heather Who likes a challenge???

Running in the dark 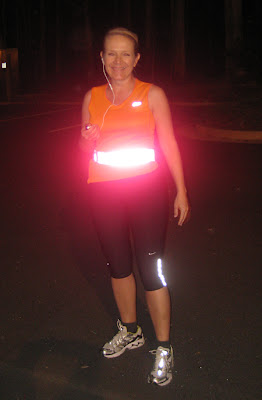 A few weeks ago was really my first time running in the dark.  Heather and I ran a mile after bootcamp one morning -but for some reason “morning dark” is different than “evening dark”. One of our Newnan members mentioned she was going for a run at 8:45pm so Heather and I said we would join her.

I got a little nervous last minute and grabbed some of Chris’s clothes that had something reflective on them… Heather – didnt ;)  However, expert night-runner-“Pam A” (Ironically new-Pam’s last name is A and mine is B so now we are Pam A and Pam B haha… kinda like Thing 1 and Thing 2 I guess) showed up in her reflective belt and gear!!  GO PAM A.!

I had to snap a picture of ideal night running attire -because Heather and I definitely didnt have it on!!  Check out that GLOW!!!

Here are some other tips for running at night and really running in general.  I borrowed them from about.com because I liked and agreed with the list ;)

3 Responses to Running in the dark